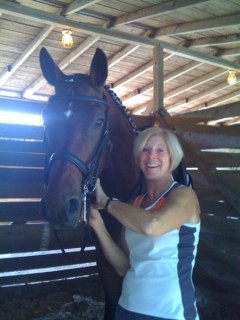 Karyn has more than 40 years of experience with horses. She began taking lessons as a teenager and quickly fell completely in love with the sport. Her early years began as a Hunter/Jumper, but transitioned to dressage and three day eventing. Karyn attended Meridith Manor in West Virginia where she began to pursue her dressage studies. Following, she enrolled as a full time student at Lake Erie College, in Painsville, Ohio, completing their Rider Trainer Program, graduating Summa Cum Laude. While in college she interned with three day eventing Olympic coach and “O” rated judge, Gabor Foltenyi. The proceeding summer was spent on the east coast training with Tad Coffin, who had just won individual and team gold medals at the summer Olympic Games the previous year. Next, Karyn took her passion for dressage and eventing overseas, continuing her training under the eye of Captain Ian Dudgeon in Ireland. Upon returning back to the United States, Karyn continued to study with Gabor Foltenyi for nearly 20 years, as well as other dressage legends such as Vi Hopkins and Chuck Grant. Even with all these experiences, Karyn still strives to better her training and understanding of these incredible animals and the beauty of the sport and all that goes into it. She often states, “It would take two lifetimes to know all that you can about dressage. There is so much to it, and you can never know enough!” Karyn attends all USDF instructor symposiums, and furthers her training in Germany under the six time Olympic dressage coach and 28 year head of the Hanoverian Verband, Kalmen DeJuranek, as well as with World Cup competitor Jan Ebling, of California. Karyn often trains under the renowed, successful rider and trainer, Yvonne Barteau.

Karyn's dreams were to create a facility, offering students of all ages, the opportunity to excel while feeling comfortable, and “at home”. She longed to build a center where students were not just “another face”, but instead, a private facility where everyone supported and encouraged each other as friends. She since, has devoted her entire career to doing just that; creating Bit by Bit Equestrian Center.

Karyn has advanced not only herself, but many students through the levels of both dressage and eventing. Through her patience and motivation she has coached students to Regional Dressage Championships and American Eventing Championships, as well as to hundreds of Grand Champion and Year End Award titles.

Outside the equine world, Karyn was born in Long Island, NY. She moved to Athens, Georgia as a young girl. At the age of 17, her family moved to Troy, Michigan with her fathers firm. She is the third born, out of four siblings, but the only one who pursued a career in horses. Karyn has 3 daughters, all of which she shares an incredible relationship with. Amanda is the oldest. Amanda shares many of the same dreams and passions as Karyn. Amanda used to be a trainer alongside Karyn. She has shown up to FEI with her horse Ravel. Amanda is now living in Seattle with her husband, Evan. Coreene also shares the love of the horses. She competes in both dressage and three day eventing on her Irish Sport horse, although she rides and competes for pleasure, not as a professional occupation. Coreene, “Coco”, is a graduate of Oakland University, where she enrolled in an accelerated accounting program. Coco is now a certified public accountant, working at Chrysler. Karyn's youngest daughter Nataly has found her calling in the world of horses and training. On January 1, 2010 Nataly moved to Doverden, Germany to study with Horst and Nichole Rimkus. She competes in both the three day eventing as well as dressage, and has returned back to the United States. She began her career as a trainer in fall, 2010. Read more about Nataly below. Karyn is very family oriented, and extremely generous to all, making it easy to see why she quickly became like a second mother to so many young girls. She is a strong, truly inspiring woman.

Nataly has been in the saddle since she was born. She has been riding for 23 years and devoted her life to the sport. Nataly's riding career began with short walks on whatever horse was availible, and has blossomed into an experienced, skillful equestrian.Growing up, she spent all her time in the barn. Just like her mother, Nataly reguarily took lessons under "O" rated judge and Olympic eventing coach, Gabor Foltenyi. Her love for the sport was shaped by a young thoroughbred she got in seventh grade. His name was Charisma, Chris for short. Chris taught Nataly tremendously; not only about the world of eventing, but dressage, too. Keeping Chris' lessons in mind, Nataly started eventing Killian, Coco's Irish Sport Horse. Killian was one of a kind, an amazing eventer. The knowledge gained from both these horses made Nataly the rider she is today. When she was 16, Nataly began riding Lousiana (Jules), an Oldenburg mare from Germany. Jules and Nataly conquered the dressage rings until Jules suffered an injury. Luckily, Jules is now recovered and back in training. Currently, Nataly is showing Ravel, a Hanoverian gelding, also from Germany. They are competing Prix Saint George, soon moving up to Intermiediare. Nataly has her bronze medal and only needs one more score to obtain her silver medal. Nataly is preparing to event Call New York, a firece throughbred with a passion for cross country. They are hoping to compete preliminary by the end of the summer.

For a period of time, Nataly lived and trained in Doverden, Germany. There, Nataly was drilled in the theory of classical dressage and eventing. Training under Horst Rimkus and Nichole Deinzer, Nataly transformed into an knowledgable rider and trainer. Currently, Nataly trains under Karyn Szadyr, as well as frequently taking lessons from Yvonne Barteau.

Nataly has pursued a career in equine training, just like her mother. Together, they run a barn based on classical theory and love for the sport. She turns young children into skillful riders, encouraging them along the way. 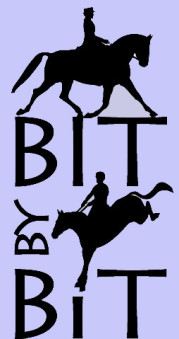 **Currently we have no lesson spots open, but would be happy to place you on our waiting list**